Apartments vary from country to country in their furnishings and fittings. What is considered standard in some households, you won’t find in others. In addition to the number of rooms, the most important basic equipment in an apartment is definitely the sanitary facilities and electrical connections. In this article, we answer your questions regarding country-specific particulars involving tenancy.

In Switzerland, the law does not directly govern which fittings are part of the basic equipment of an apartment when you move in. According to Art. 256 OR, the landlord is only obligated to hand over the apartment in a “condition deemed suitable for use” and to receive it back in the same condition when the tenant moves out.

In Switzerland, apartments and houses are usually well equipped, so that tenants can live, cook and wash in them as soon as they move in. A tenant can usually expect to find a “fitted” kitchen, which includes a stove, refrigerator and oven, along with a washer and dryer, which are normally used in common with the rest of the building’s tenants. Modern apartments usually include TV and Internet reception. Underfloor heating and parquet floors are also available, depending on the standard of construction.

With 57.5% of its housing being rented out, Switzerland is a land of tenants and has the highest share of rental households in Europe. There is no conclusive explanation regarding why we like renting. Which gives rise to all kinds of theories and assumptions. In general, residential property in Switzerland is very expensive to buy and requires a lot of capital outlay. Advantages to renting include mobility and the associated flexibility in choosing where to live and work. In addition, condominiums have only been introduced relatively recently, which still has a lasting effect today. With a few exceptions in urban areas, you can quickly find good-quality apartments, and it is generally fairly easy to enter into a tenancy agreement in Switzerland’s current rental housing market.

Characteristics such as punctuality, modesty and neatness are often associated with Swiss. This is also reflected in their decor. The concept of home as a haven is the focus of most interior design, which means that the furniture usually appears rather restrained and simple but is often of high quality.

The most widespread form of living in Germany is an apartment in an apartment building. Actual housing fittings in Germany, however, may vary, depending on the region. Fitted kitchens are not usually included as part of the basic housing equipment. But it is important that a cold-water hook-up, electricity and possibly gas are available. When moving out, you either take the kitchen with you or you try to sell it to the landlord or the new tenant. If the rented apartment already has a fitted kitchen, then this must be reasonably accounted for in the rent (i.e., acquisition value of the kitchen divided by the useful life plus capital interest).

Furthermore, in old buildings, heating does not have to be provided for all rooms. New apartments include a telephone connection and TV and radio reception as part of the standard equipment.

Germany is also one of the countries that has a high percentage of rental households. On average, just under 29.9% live in rented apartments in the EU. Germans are well above this average at 48.3%. Of course, this is rooted in history. After the wars, reconstructing destroyed cities was often only possible by building blocks of flats and large multi-family dwellings, so that constructing single-family homes in large numbers was out of the question.

Residential buildings in Germany vary greatly, which means that the type of “residential culture” thus varies—ranging from the kind of decor found in old buildings to prefabricated buildings to state-of-the-art new construction. The living room is the meeting place for the family and functions as the heart of the home. A typical German decorating style does not exist, so that the furnishing styles are very diverse. 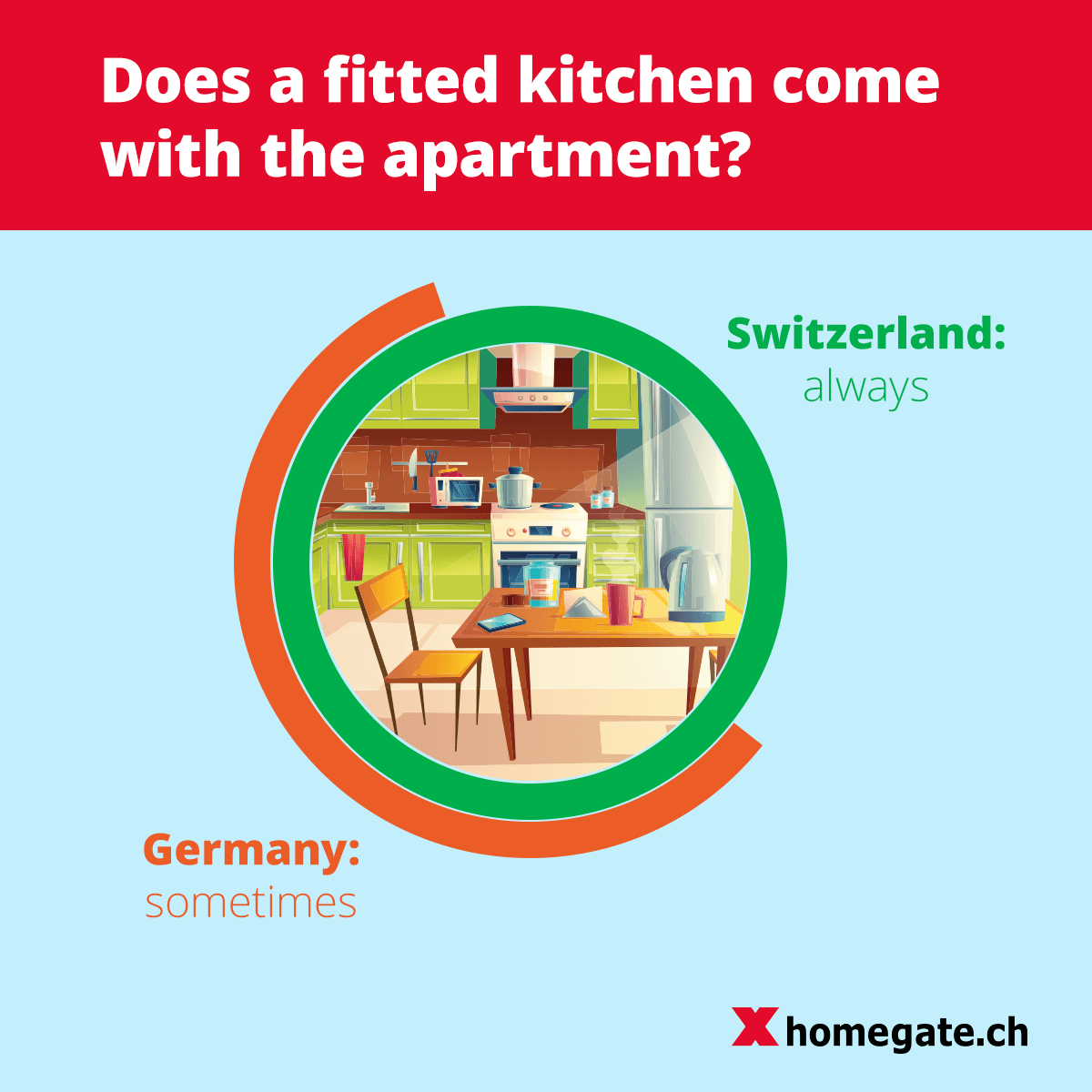 Other countries, other customs—Everything you need to know

Everything that is considered part of a home and the type of interior design style varies greatly from country to country.

Compared to Germany and Switzerland, people usually buy rather than rent houses in the US. Depending on the area, many houses often have no basement. Instead, kitchen cabinets and counters, the stove, an oversized refrigerator, washer and dishwasher usually come with the house. The apartment or front door usually opens directly onto the living room, so there is no entryway area.

We Swiss are most often used to having a shower and toilet in the same bathroom—and best of all, a tub as well. But bathrooms aren’t this well-equipped everywhere. In the Netherlands, the shower is often separate and in Austria, the toilet is almost always located in its own “water closet.”

Further differences can also be found when comparing Spanish apartments. Most Spaniards prefer to live in multi-family houses, where stone floors and ceramic elements complete the Mediterranean flair. Historically, cooking used to be located outside, so that even today terraces, courtyards and porches are still a meeting place for family and friends.

Italians do not seem to mind washing dishes by hand, and dishwashers are rarely found in Italian homes and apartments.