Whether you’re planning a new kitchen or looking to replace an old one, it’s important to get the choice of hob right. Below, we have outlined what you need to know about electric, ceramic, induction and gas hobs.

While gas hobs often come as part of a hob and oven combination, other types of hob can be purchased separately. The best choice for your kitchen will depend on whether the hob is to be part of a fitted installation or whether you have enough space for a free-standing cooker that combines oven and hob. Free-standing cookers are unusually a slightly more economical option.

Solid plate electric hobs are robust and economical, which is why they are often to be found in older buildings. They are a somewhat less fashionable choice for newer or renovated properties. 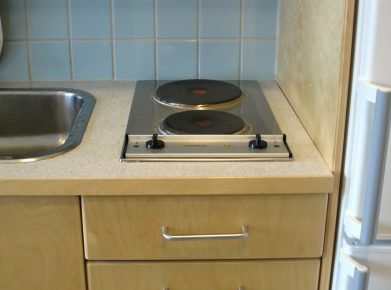 Electric hobs use a lot of power – unsurprisingly, as the whole solid plate of steel has to get hot before the heat can reach the pan.

The grooves in the surface make them difficult to clean. And on top of this, the raised plate design makes it difficult to pull the pan away from the heat in a hurry if you need to. Another disadvantage that is important to bear in mind – one that is common to all hobs (with the exception of the induction variety) – is the risk of burning yourself.

Plus points here include price, robustness and usability. Another positive is that they give off very little heat apart from the active cooking zone. And, of course, there’s the advantage of being able to purchase just the hob rather than having to buy a whole hob and oven combination. 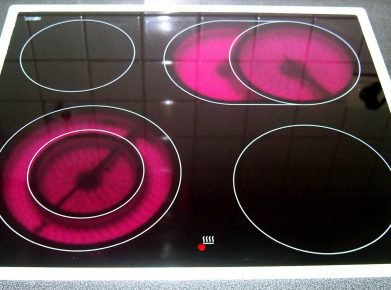 The red glow of a ceramic hob (Wikipedia)

Because all the controls are usually incorporated into the ceramic hob unit, you get to install it where you want. You can set it in the top of a fitted kitchen unit, for example. Ceramic hobs often feature flexible cooking zones (many, for example, allow two smaller zones to be combined into one large one). And, last but not least, these hobs score highly in terms of design.

One disadvantage is that they use more energy than induction and gas hobs. It also takes a long time for the burner to heat up and the ceramic hob continues to output heat for a long time after it is switched off. Not all types of pan are suitable for this type of hob. The surface scratches easily and spilled food can quickly leave burn marks.

Induction hobs produce heat by generating a form of electromagnetic field. As they don’t actually heat up the burners, they are more energy efficient than electric or ceramic hobs. Special pans with a magnetised base are required (tip: when buying a pan, test it with a magnet). 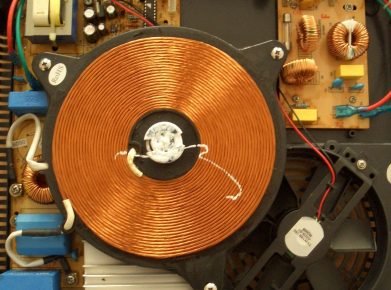 It may look like a quirky record player, but it’s an induction hob (Wikipedia).

Induction hobs use around 30% less energy than ceramic hobs and around 50% less than solid plate electric hobs. Other advantages: you can start cooking instantly and there’s high-precision temperature control.

It’s also impossible for children to burn themselves by accident. Disadvantages: the cost of investing in the hob and pans and the energy losses resulting from the standby controls. A good induction hob should have a standby consumption of less than 2 percent.

A lot of food fanatics and amateur chefs swear by gas hobs. Hobs like this add a professional flair to a kitchen. And with a wide choice of design variants like the latest ceramic gas hobs, they blend well with any kitchen, whether traditional or contemporary. But, of course, the classic stainless-steel design will always have its own special charm.

Cooking with gas is quick and precise. There is no heating up phase and it’s easy to adjust the heat in an instant. Energy consumption is low, making a gas hob an economical choice.

The disadvantage is that you need a mains gas connection and a lot of people worry about gas leaks, despite the safety mechanisms. Another downside is that they are more difficult to clean than induction and ceramic hobs. And they require greater vigilance when children are around.